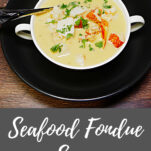 This is a soup that tastes like a fondue and with lots of super-fancy seafood. We made this for New Year’s Eve and it was sufficiently decadent for such an occasion.

The liquid base is beer. You could use water but of course beer does add flavor. Also adding to the chicken bone broth cubes adds to the flavor and gives the soup a velvety mouthfeel. Sherry is required for a fondue flavor. The cheese is shredded Swiss. Better Than Bullion Lobster Base is amazingly flavorful, and I use this as the sodium contributor to the recipe (and it give a serious punch of seafood flavor).

Make a roux with flour and butter. All of the roux I make are made with a 1:2 ratio of butter:flour. You want to cook the mixture for a minute or two after they’re combined to cook off the “floury” flavor.

After that, add your liquid and cook until thickened. In this case it was beer and sherry. Cook until thickened over medium heat. If you add the liquid after it is warmed, it comes together faster, but cold is ok too, you just cook it longer.

After the mixture is thickened, add the heavy whipping cream and spices, and heat through, then add cheese and cook until the cheese is melted.

Then add your seafood. Here, I used lobster, shrimp and scallops. The lobster and scallops are from AllFreshSeafood and the shrimp are from Great Alaska Seafood.

Heat the seafood until it is warmed through and serve. This was so delicious!! 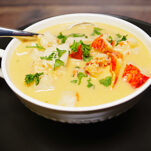 Have you made wings in your Instant Pot Air Fryer

One of the things I can't wait for when the weathe

Do you like wild rice? I absolutely LOVE it but it

This shellfish soup comes together very quickly an

Have you tried Fiesta Ranch? It's like regular ran

Have you tried making meatloaf in the Instant Pot?

Smoked paprika pork chops ⁠ Made in a single pan

Does anyone else remember Johnny Marzetti, the caf

😋😋😋😋 Looking for a good dinner when it

To make a perfect muffuletta you need a perfect br

Caesar Salad is one of those simple but so satisfy

Lately I've been on an appetizer kick, where I'll

I *truly* believe that pizza should be its own foo

What food are you craving right now? ⁠ ⁠ For m