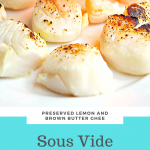 I’m working my way through cooking everything sous vide style, and got to S for scallops. I was very happy with the results.

I had made preserved lemons…and lemons+salt sounded pretty darn good with scallops (after sitting for 3 weeks, the rind melts into the jar adding an amazing flavor). I also used about a tablespoon of Brown Butter Ghee to give it a nice buttery, caramelized flavor.

I actually froze about 4 or 5 of the sliced preserved lemons. I did that because less liquid in the bag=better sealing on the vacuum pack. The scallops were frozen as well, and were purchased from Great Alaska Seafood. I’ve ordered from them multiple times in the past (lobster, scallops, crab and shrimp) and always gotten outstanding quality and service.

I cooked the scallops at 124 degrees farenheit (the temperature that you could cook rare steak at) in a sous vide waterbath. The sous vide I’m currently using is an older model Anova, but this newer model (with wifi!) would be similar. I’ve been very pleased with the Anova, I’ve used it consistently since 2014 and it’s still going strong.

This was after about an hour and a half. I do not think you would necessarily need to cook that long, but I was cooking it along with some leftover steak and I wanted time for the preserved lemon flavor to really get into the scallops.

As you can see above, although the texture and cooking temperature are perfect and amazing, anything cooked sous vide does come out looking rather anemic (or anaemic if you’re in the UK). So if you want some color and the flavor that comes along with it, you can give them a quick sear in a pan or on a grill. But this is more fun…

You’ll be laughing and saying “fire, fire” the whole time a la Beavis and Butthead. One of you might even say “I am the great Cornholio”.

Regardless of childish antics, the scallops turned out amazingly well. I saved the lemons and scallop juice from the bag and used it in a shellfish soup that I made later in the week.

What's your favorite bar time food? Much to the ch

It's hard to beat low and slow in the Masterbuilt

A twist on an old classic...Mississippi Sin. One t

A great way to use leftover roasts or steak!⁠ Ta

After a quick turn in the smoker, these Asian Shor

Soft pretzel bites are so fast and easy, it's shoc

Homemade sausage? Yes please. These are made to ta

Anyone else agree with me that pizza should be its

I know it's still summer, technically, but with th

Many of these were eaten at Denny's after bar time

Meatloaf with Tex Mex flavors, made in the Instant